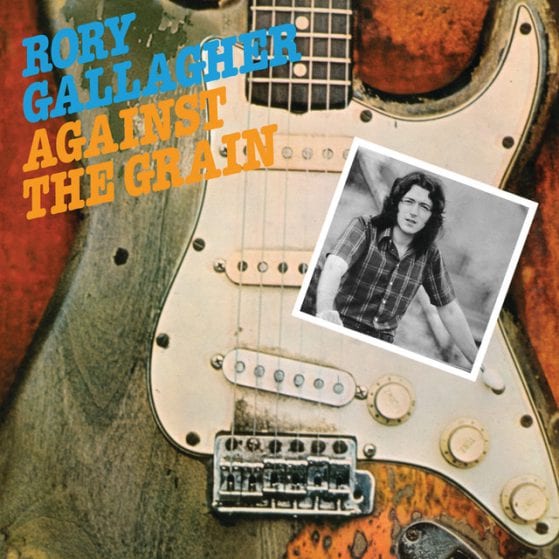 Rory’s seventh album catches him in sparkling form. He had released the hugely successful Irish Tour album a year earlier, recorded with the great Albert King at the Montreux Music Festival and had just negotiated a new deal with Chrysalis Records. Rory was now established as a major solo artist and was producing some of the best live and studio performances of his career. Against The Grain perfectly captures the enthusiasm and emotion of that time.

The band’s line up had been unchanged since Blueprint with Gerry Mcavoy on bass, Lou Martin on keyboards, and Rod de’Ath on drums. After years of playing and recording together a musical understanding and trust had developed within the group that resonates throughout the entire album.

The album opens with the rip roaring Let Me In, a track that perfectly marries Rory’s vocals and guitar with Lou Martin’s piano, in a sublime middle eight.

The close harmony of vocals and piano continues with the intriguingly titled Cross Me Off  Your List.

Rory’s taste for jazz can be witnessed in the use of the minor chords and the parallel vocal/guitar work, echoed by lou’s keyboard.

Ain’t Too Good, Rory’s understanding and use of melody is particularly evident on this track which concludes with an almost orchestral sound.

Souped-up Ford, for a number of years rory toured in a Ford Executive (zodiac v6) which was used by Muddy Waters when he was in the UK recording the 1973 London Sessions album. The blues legend took a shine to the car and told rory so. To Rory that was the ultimate seal of approval and is the inspiration behind this high-speed slide track. Suffice to say Rory and the car were never to be parted!

Bought and Sold, even 5 years after the split with Taste, Rory still felt the pain of that time, translating the frustration and disappointment perfectly in this mid-tempo track.

I Take What I Want,  this 60’s Sam & Dave cover version is played with passion and abandon by the entire group who obviously enjoy the soulful kick-back beat.

All too often Rory is pigeon-holed as a ‘blues/rock guitarist’ but as his legions of fans will testify his ability as a lyricist should never be undervalued. Against The Grain has it’s fair share of exuberant ‘foot-stompin’ moments but in it’s more introspective tracks such as Lost At Sea (where rory perfectly describes the effects of loneliness),we can hear the more contemplative side of rory’s music.

All Around Man, was written by Bo Carter, one of the original members of the Mississippi Sheiks, a band Rory greatly admired and paid tribute to on Photo-Finish. This inspired cover version features a great Lou Martin solo.

Out On The Western Plain, Huddie Leadbetter a.k.a. Leadbelly wrote this fanciful tale about life as a cowboy which name checks two of the west’s most famous sons Buffalo Bill and Jesse James. Rory plays the song on his Martin D35 tuned to DADGAD which creates the wonderful celtic / blues feel.

“Watching the sky with tears in my eyes, i feel lonely / time’s flying by, but i start to smile, it’s not easy”
the demise of taste is described again in At The Bottom. It had been nearly 5 years since the split but it is clear in the lyrics that Rory was only just coming to terms with that time in his life.

Cluney Blues a jumping blues instrumental and My Baby, Sure, a rock-a-billy country track in the guitar style of ‘Carl Perkins’, are both taken from the original Against The Grain sessions and are featured here as bonus tracks.