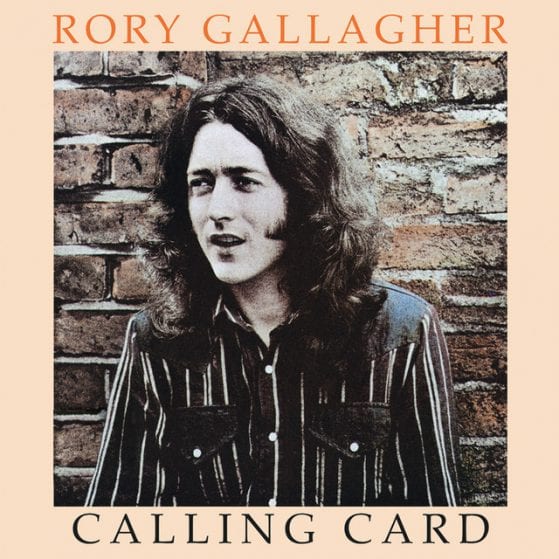 Rory’s eighth solo album, CALLING CARD, was recorded during 1976 at the famed Musicland Studios in Munich. All of Rory’s previous releases had been successfully self-produced. For this album he was keen to find a producer who had an affinity with traditional rock values but was open to new ideas.

On his previous release, ‘Against The Grain’, Rory had started to shift away from the blues/rock style he’d made his own, creating an album with a harder sound. He was keen this progression should continue but needed to find a producer who shared his convictions and could help create the sound he wanted. During the 70s ‘Deep Purple’ were one of the most successful rock bands in the world and Rory had toured the U.S. with them. Roger Glover, Deep Purple’s bassist, offered his services to Rory, seeming to be the perfect candidate to produce the album. They began work on ‘Calling Card’ in the summer of 1976.

The band, Gerry McAvoy on bass, Lou Martin on keyboards and Rod de’Ath on drums, added the final element to the ‘creative’ mix. In the three years they had been performing together they had grown into a formidable band. As Roger Glover explained, “they all seemed very dedicated to Rory, there was an allegiance, born of years of smoky clubs and endless journeys”. This was the fifth and last release featuring this classic band line-up.

Setting the tone for the album Do You Read Me starts with a sharp, rocking intro. highlighting the shift in Rory’s musical direction.

Moonchild – Is a perfect example of the production Rory was aiming to achieve on this album, marrying a traditional hard rock style with the melodic values of jazz. The track is full of tricky phrasing and intricate guitar work, which Rory delivers effortlessly.

Calling Card – Rory’s jazz influences and wonderful lyrics again shine through on this title track. The interplay between the guitar and the piano throughout the song is particularly pleasing. When interviewed in 1995 Roger Glover nominated this as his favourite track on the album.

I’ll Admit Your Gone – A hybrid, melodic track encapsulating folk/jazz in a blues fashion. Rory at his melancholy best.

The funky rhythm and unison of guitar and vocal on Jack-knife Beat are reminiscent of ‘Little Feat’, a band Rory greatly admired.

Edged In Blue – Chris Wright, then head of Chrysalis Records, who originally released the ‘Calling Card’ album’, told Rory if this track was released as a single it would almost certainly be a number one chart hit in the US. In typical Rory style he decided not to release it as a single, leaving it as one of the outstanding tracks on ‘Calling Card’.

Barley And Grape Rag – This acoustic track was recorded in the dining room of the studio, with the band members gathered round Rory as he played. As you imagine the scene and listen to the track, you can hear the intimacy and warmth they felt for each other. It came to the attention of the Dubliners who, much to Rory’s delight, recorded a version of it for their 1992 album ’30 Years A’ Greying’.