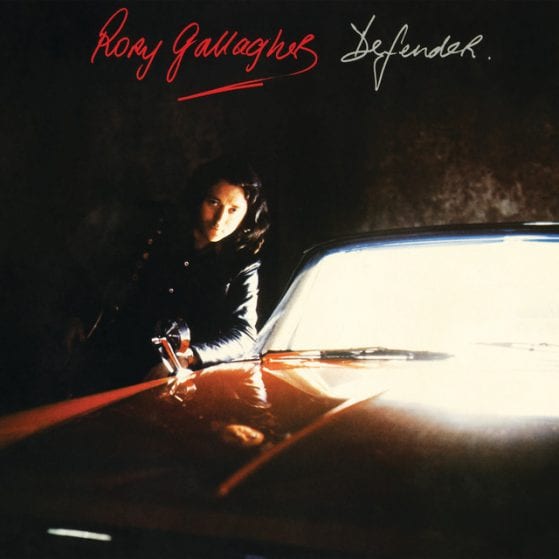 “The sitar -that was the x factor. We mixed and remixed it, but there was still something missing, so we took the Coral sitar in for a couple of little phrases, and it knitted it together.

“The jingly noise is me shimmying the pick down the strings, like a violin bow with a flange effect; nothing incriminating. Ninety per cent of the music is played with just the amp fairly hot. But I do have a Boss flanger, an octivider, and a Dod analog delay. In the studio, I bring in an old WEM Copycat, and the old red MXR Dynacomp compressor – that’s a great gadget, even an old raunchy amplifier will get a bit of nice crispness. “

“My favourite track. It’s a rhythmic thing, that I had to keep calm and controlled. There’s a sort of John Lee Hooker feel to it.

“The main guitar track is my Gretsch Corvette, which is like a Gretsch jnr, but with the pickup changed to a Gibson P90. I used a Washburn acoustic to add a little ghost.

Slide lead guitar is an old black Fender Esquire -1953, I believe -through an old yellow Fender Deluxe, and the Dod echo. I like using my own echo on overdubs -I prefer to use effects when I’m recording, rather than put them on afterwards, as any time you touch your guitar, you get an extra noise you can’t get later on.”

” Main guitar was my Eccleshall Telecaster with Gibson PAF’s, lead phrases were a white Tele, but the slide was the Gretsch Corvette through an AC30. The sound was basically like an old-fashioned radio blowing up. I don’t like fuzz guitar actually, just amps that are getting ready to blow!”

I AIN’T NO SAINT

“This is a kind of Albert King thing. Guitar was a three tone sunburst ’57 Strat I rarely use. I’ve put heavier frets on it, and neutered the middle tone control. It’s a very Buddy Guy Strat with a maple neck. Rosewood necks always sound a bit more mellow than maple. You get a different tone tension from a maple neck; maple necks are more snappy. When my old Strat gets steamed up and the neck gets wet, it gets more like an SG.

‘”I double tracked an alto sax, though I didn’t credit myself with it on the sleeve – got to keep the old ego quelled. I put it down as a guide for a real player, but it held up. And we added a brass tone from a little Casio keyboard, which I did with two or three fingers. I wanted that AC Reed/Buddy Guy stabbing sound.”

“Some songs you recognise immediately are going to need production to help them build. This was an Armageddon type situation, so it needed to be built up. We did our best with it. It was the most difficult to put together -it doesn’t appear complex, but it was quite fishy.

“I was playing a Gibson Melody Maker through a Boss Playbus, which has surprisingly good, hard snubby sound, and a little Ibanez analog delay thing. And I used the Eccleshall Tele”.

You seem to prefer Teles to your Strat these days?

“It depends. I love the Tele sound for rhythm parts, as it’s very accurate. You have to work harder -no free gifts. But I put bigger frets on and tilt the neck back a bit, use the lead [bridge] pickup and back off the tone a bit. Lead pickup is 6k on a Tele, compared to 5 or so on a Strat -so it’s more honky.

“Rhythm guitar was the Gretsch Corvette. We wanted to build it up without turning it into an orchestra thing, so I added a dulcimer instead of acoustic. Lead guitar was a white metal body Tokai Talbo -a very under-rated guitar. That went through an octivider – there’s that inconsistent harmonic in them. And if you play harmonics with your nail as well, you can get all three going.

“Most of my solos are improvised, but you find that if you do it once or twice in the studio, you end up using your own ideas from the first couple of takes. Obviously sometimes you have to sit down and work out what would fit. But often it’s the old problem: the more you add the worse it gets.”

“The slide sound was the Corvette, done live, through the Marshall, John Cook added vamping low piano, and I put on some country lines on the Strat. If you record quietly with a very sensitive mike, you can get great sounds.”

“That was the Strat doubled up, with an acoustic drifting in. John Cook doubled the guitar with a keyboard sound. Over that there are Hank Marvin type country lines on the Talbo”.

“The only cover on the LP. It’s one of my favourite songs, a very wry type of blues. Sonny Boy Williamson is backed by the Muddy Waters band on his version. We always lay down some blues standard, partly to relax, partly because you never know what will happen. We didn’t change it much: he did it slightly slower, and didn’t have bass on his version.

“The harp is Mark Feltham from Nine Below Zero, a friend of Gerry and Brendan. I’d liked to have used him for a couple of more tracks, but it didn’t fit the schedule.

“The lead was done on a Tele through Mark’s harp amp, a little Fender Champ. Rhythm is on an old Epiphone Casino, which has a kind of woolly sound”.

“That’s the challenge of a European trying to write blues songs -you have to tackle it hard, make sure it’s a very good song. I think this is a song that could be covered by an American blues artist. I hate getting into colours, like white/black blues.

“I recorded the track on my own with my foot tapping, a tambourine, and a low electric, a Veillette-Citron, made in New York. It’s tuned very low, like a baritone guitar. I used my Washburn acoustic; the slide was a National Duolian. Lou Martin from the old days plays on this one. Lou has that unusual touch with acoustic piano, give it that extra touch of drama.

“I enjoy playing acoustic. ..sometimes I prefer it to playing electric, as you’re really close to the instrument -it’s very “organic”. I use strong strings on the acoustic, which is a great leveller: you can get very fond of yourself playing light strings on an electric guitar. No faking it on acoustic.
“I’d love to do an acoustic album, great fun. I just need material and time -it takes us so long to get organised from one electric album to another, never mind acoustic. But I will do it. Double bass, dulcimer, acoustic guitar …”

The two bonus tracks, Seems To Me (a great strolling blues number played on baritone guitar) and No Peace For The Wicked, (a suitably hard bitten blues finale) were not available on the original release of the album.

Lets leave the final works to Mark Feltham, who described his friendship with Rory in an interview – “Rory was an angel – an angel. He was a fantastic person. A wonderful human being. He was one of the most wonderful men I ever met in my life. I can say that honestly and openly. He was a gentleman as in the words ‘gentle’ ‘man’, you know?”