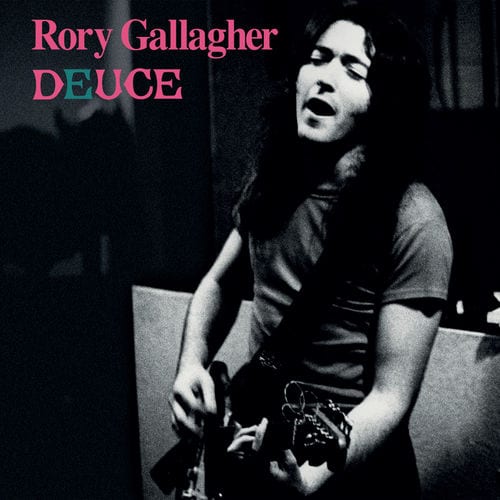 In the early Autumn of 1971, following hot on the heels of his eponymously titled first solo album, a vibrant Rory returned to the studio with percussionist Wilgar Campbell and bassist Gerry McAvoy, to lay-down his Deuce.The cards in hand would further trump his critics following the demise of his band Taste, at the end of 1970.

In prolific song-writing form, Deuce would make it his third self-penned album in a row, having written all of Taste’s second album, On the Boards as well as Rory Gallagher, adding to his diverse catalogue of songs.

The album would be lauded by his growing worldwide army of admirers, from guitarist Johnny Marr to American comedian Bill Hicks, who cite this album as amongst their favorites.

Johnny Marr summed up the influence the album was to have saying: “There was one day when I was playing along with the ‘Deuce’ album which was a complete turning point for me as a guitar player”.

In American Scream,The Bill Hicks Story author Cynthia True noted that:“(Bill would) listen to KISS and Rory Gallagher until his mother called him down to dinner. He played Gallagher’s Deuce so much he wore it out and had to buy a new one.” Diametrically contrasting the crisper/clean results achieved on his previous record, Gallagher chose to record at Tangerine studios, Dalston, London, which had been built by pioneering producer Joe Meek.The introduction was made by The Tornado’s guitarist Stuart Taylor. Sited next to a bingo hall, the studio had fallen out of mainstream favour, save only with the reggae bands who also liked the funky feel of the glaring, tangerine painted studios.

During the bingo calling in the adjoining hall, the working hours for the studio would often cause conflict. Faint 88s and 66s would be picked-up on tape, whilst the bingo ladies would be rocked from their leisure time, confused by the ‘caller’ shouting “Turn it down!!” through his microphone.This meant volume had to be curtailed. However, the ‘out of bingo’ hours were better-suited to Rory, who chose to record his new album while others slumbered.

Again, his own producer for the unorthodox method of capturing a ‘live’ performance feel in the studio, Rory favoured recording after shows.As he was still on the road promoting his first album, on many occasions the sessions would start up in the wee small hours. Stamina and endurance never seemed to phase all concerned, including engineer Robin Sylvester who would work on, amongst others, the Live in Europe, Irish Tour and Notes From San Francisco albums.Also a musician, Robin was bassist with Byzantium who were on tour with the Gallagher gang.

“I love playing to people.The audience means a lot to me. It’s not the whole thing, I love recording too but I need regular and frequent contact with the public. It gives me energy”, Rory stated at the time.

The menacing rock guitar chords of Used To Be metaphorically set a scene that Rory had had moved on from his past.The raw, energetic, crystal vocal is ably complimented by his rhythm section of Wilgar and Gerry.

I’m Not AwakeYet is a song of suppressed anticipation for a loved one, Rory’s maturing, distinctive rock guitar can be heard, with his Celtic, jazz-tinged, blues style, making much use of his additional acoustic playing.

Switching to twelve-string guitar with rack-mounted harmonica, Don’t Know Where I’m Going serves as a homage to the ‘troubadour’ blues from Sonny Terry and Brownie McGee, through to Bob Dylan.

This optimistic song with quintessential Gallagher lyrics tells of the ‘off the road’ freedom high he would feel whilst back home, while evoking an old tradition in Ireland of reading the future in the emptied cup of tea from the pattern of left leaves.The opening, up-tempo open-chorded tuning on Maybe I Will deceives the light and shade of pace to follow, as the rhythmic track winds through Rory’s wide-ranging guitar playing.

Whole Lot Of People, with it’s intricate open-tuned guitar picking, introduces us to the maestro of the slide guitar. The sharpness of this playing masks the lyrics of the politics of the then emerging and troubled ‘new‘ Ireland. This theme is continued through into InYourTown.This song tells a tale of jailbreak,the hidden sentiment being the much resented, Internment (without trial) that had just came into force a month earlier in the North of Ireland. Much loved by the fans, it became an essential live standard that would often close Rory’s live shows.The theme of the track would later inspire Thin Lizzy’s ‘Jailbreak’.

Should’ve Learnt My Lesson, demonstrates Rory’s lyrical command of the blues song, with Elvis to ‘Muddy Waters’, very much to the fore. Ironically, one month following this release, Muddy, his hero would invite the young Irishman to record with him on his Grammy-winning ‘London Sessions’album, endorsing the world-wide musical esteem Rory was now held in.

With it’s abstract start, There’s A Light tells of Rory’s contentment in his own skin and surroundings at that time. Employing and enjoying his range of jazz influences, Rory scat sings his lyrics, while harmonizing with his guitar and subtly knocks off harmonic notes on his instrument. Back on the acoustic, Rory solos through Out Of My Mind, a country-blues track-and is at his pickin’ finger best. Gallagher had immense respect for musicians such as Doc Watson (who incidentally, played a US-made Gallagher guitar) and for many of the Nashville pickers.

The album’s crescendo, Crest Of A Wave is a two tempo-ed track which gives more expansion to Rory’s guitar work from the swirling ‘Leslie’ sound through to the slide guitar tour-de-force, intertwining with Campbell’s percussion patterns and McAvoy’s solid bass.

Deuce is an example of Rory at his creative best; to write, produce and perform such a work aged just 23, is some feat.With the passage of time, nothing is lost between the grooves; neither the record’s intensity nor integrity. As it was then, this album is classic and not fad nor fashion – it’s an ACE!