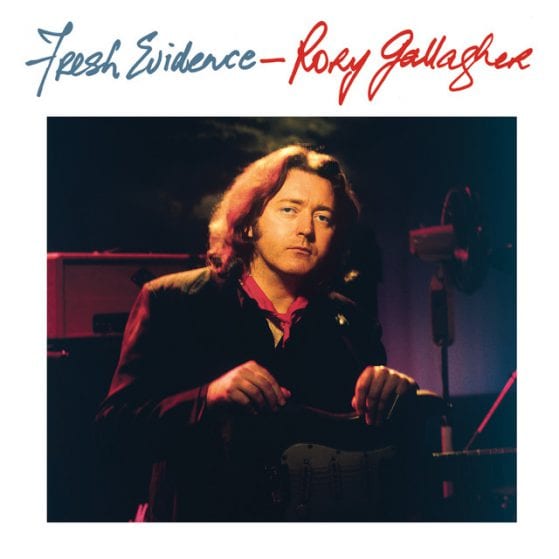 Rory Gallagher was considered by many to be the greatest guitarist of his generation. His undoubtable drive and success was married with an unpretentious and generous nature that won him many friends. Bono summed this up perfectly when he said, “Rory was one of the top ten guitar players of all time, but more importantly, one of the top ten good guys”.

The band came together at the beginning of 1990 and started work on the album that would become ‘Fresh Evidence’.

ALEXIS – This is a tribute to the father of British blues, Alexis Korner. Throughout Rory’s career his love of jazz has been represented by the artists he collaborated with and the music he produced. This is one of two instrumentals on the album and both tracks represented anew challenge to Rory.

EMPIRE STATE EXPRESS- By including this song on the album, Rory was playing tribute to another great influence, Eddie ‘Son’ House. This was recorded on St. Patrick’s Day reputedly in one take.

GHOST BLUES – The beautiful Celtic intro is followed by a heavyweight beat. Both Gerry McAvoy and Brendan O’Neil excel on this track. This beat is coupled with Mark Feltham’s fantastic harmonica playing. The poignant and touching lyrics proved all too prophetic.

THE LOOP – The ‘Loop’ is the name given to the public transport system in Chicago, and this track could well be a tribute to the Chicago blues. This instrumental has a compact and catchy melody that became the signature tune for the BBC TV comedy series ‘Fry & Laurie’.

SLUMMING ANGEL- At first this seems a typical hard rocking track but as with much of Rory’s music it takes you on an unusual trip.

During the remastering of this record two additional tracks from the original sessions have been added:

NEVER ASKED YOU FOR NOTHIN’ – A return to the Cajun blues vibe emphasised by Geriant Watkins’ (Balham Alligators) appearance on accordion and Brendan’s brush-drums. There’s some lovely duet-ing between Mark’s harmonica and the guitars.

BOWED NOT BROKEN – This song finds Rory writing about one of his favourite subjects ‘the downtrodden person’ who refuses to give in and fights against all odds, no matter how great. many a parallel can be drawn with his own personality. A wonderful country rock feel to this track.