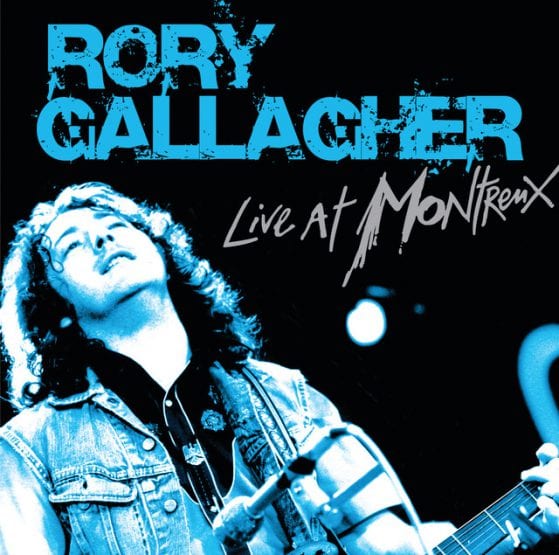 Throughout his three decades in music, the Irish blues-rock guitarist Rory Gallagher toured relentlessly and always appeared in his element on stage. In fact, he was adamant that his concert recordings best captured the raw energy he exuded, whether covering the Chicago blues classic Messin’ With The Kid – originally by Junior Wells – or the Stax soul standard I Take What I Want – a mod favourite by Sam & Dave – or performing original compositions like the ebullient Tattoo’d Lady or the barnstorming Laundromat. His fans seemed to share that opinion. Many found their way into his rich catalogue via the landmark Live In Europe, a Top Ten album in 1972, or the even more legendary double vinyl set Irish Tour ‘74, which captured Gallagher playing not only in Cork, where he grew up, and Dublin, but also in Belfast at a time when few bands ventured into Northern Ireland at the height of the ‘troubles’. The esteemed British film-maker Tony Palmer, who co-directed Frank Zappa’s 200 Motels and would later helm the TV series All You Need Is Love: The Story of Popular Music, filmed the occasion for a fascinating documentary entitled Rory Gallagher: Irish Tour, while the Irish Tour ‘74 album went on to sell two million copies worldwide.

Gathering the crème de la crème from four concerts at the Montreux Jazz Festival between 1975 and 1985 and the complete 1994 gig, The Definitive Montreux Collection offers another great opportunity to watch and listen to Gallagher in his natural habitat. The guitarist enjoyed appearing at the festival co-founded by the late Claude Nobs, the ‘Funky Claude’ immortalised in Deep Purple’s Smoke On The Water, and gave some his best performances there, as captured here. Nobs launched the Montreux Jazz Festival as a three-day event in June 1967, but over the years it has grown into an event lasting a fortnight and made the bijou Swiss town on the shores of Lake Geneva world famous. From 1969 until the mid-seventies, he also organised concerts under the Super
Pop Montreux banner and added music evenings to the Rose D’Or, the Golden Rose Festival of Entertainment and Television held there. In August 1970, Nobs attended the Isle of Wight Festival where he hoped to convince headliners like The Doors and Jimi Hendrix to come to Montreux. As the wonderful host and raconteur recalls, “after I saw Taste with Rory Gallagher on stage, I decided to hire them too!” Sadly, Hendrix died the following month, and when The Doors came to Montreux in April 1972, it was without Jim Morrison who had died the previous July. Nobs had better luck with Gallagher and Taste who played Montreux with Cactus a few days after both appeared at the Isle of Wight. “My friendship with Rory was immediate as we both love the blues,” said Nobs, who blew a mean harmonica himself, and would sometimes get up and jam with some of the Montreux headliners. “Rory was one of the nicest people I ever met, as quiet backstage as he was wild on stage.” Indeed, Taste played such a stormer at Montreux that the set was issued as Live Taste in February 1971, after the Irish power trio had broken up, though the Swiss recording was soon overshadowed by the Taste – Live At The Isle Of Wight album which swiftly followed.

Taste shone the spotlight on Gallagher in the late sixties but he had already been playing guitar for over a decade. Born in Ballyshannon, County Donegal, in March 1948, he came from a musical family. His father Daniel, who worked for the Irish Electricity Supply Board, was a capable accordionist and singer while his mother Monica acted and sang too. Rory’s younger brother Dónal, subsequently his manager and now the keeper of his legacy, was also interested in music and played in a skiffle trio with him. Rory Gallagher started on the ukulele and a succession of ‘Elvis Presley’ plastic guitars before graduating to an acoustic. He taught himself since “there weren’t too many guitar teachers around” as he put it, and became proficient enough to win a talent contest in 1960. He used the prize money to buy a Solid 7 electric model. Three years later, he invested £100 – a veritable fortune half a century ago – in the 1961 sunburst Fender Stratocaster he went on to use throughout his career. “It was imported from America. At the time, there was only one other in the whole of Southern Ireland,” he said of his trademark instrument which took a battering over the years but became as much a symbol of his dedication and down to earth charm as the jeans and checked shirts he wore. “In certain people’s opinion, 1961 is when Fender hit their peak. This is the best, it’s my life, this is my best friend. I don’t like to get sentimental about these things, but when you spend thirty years of your life with the same instrument it’s like a walking memory bank of your life there in your arms,” he told biographer Marcus Connaughton in the early nineties. Armed with the Strat, in 1964 he joined the Fontana Showband, then the only outlet for a budding musician in the South of Ireland, and played everything from Jim Reeves standards to Chuck Berry rock’n’rollers. “It was good training from a professional point of view,” he remarked of his apprenticeship, which also included two stints in Hamburg, the first time with Impact, and then with an embryonic version of The Taste. He soon dropped the definite article and the original rhythm section to recruit bassist Richard ‘Charlie’ McCracken and drummer John Wilson from Belfast. By June 1968, they had moved to London and started a long residency at the Marquee Club in Wardour Street, where Gallagher had first seen Brian Jones play slide guitar with the Rolling Stones four years earlier. Gallagher soon became an expert at using the bottleneck on both the acoustic and electric. In November 1968, Taste supported Cream at their farewell concert at London’s Royal Albert Hall and signed to Polydor. They recorded a couple of well-received studio albums, Taste and On The Boards, on which Gallagher also played harmonica and saxophone, and flew the flag for Irish rock before Thin Lizzy. Taste criss-crossed the British Isles and also made considerable headway into continental Europe and the US, which enabled their frontman to see his hero Muddy Waters in Chicago in July 1969. Gallagher was one of the main contributors to The London Muddy Waters Sessions album three years later.

When Taste broke up at the end of October 1970, Gallagher was already hailed as the next guitar hero, and favourably compared by critics and fellow axemen to the Yardbirds triumvirate of Eric Clapton, Jeff Beck and Jimmy Page. In March 1971, he debuted his new trio, comprising Belfast-born bassist Gerry McAvoy and Irish drummer Wilgar Campbell, in France. Both their eponymous debut and the Deuce album made the charts and went on to sell 100,000 copies, yet after 1972’s Live In Europe, he reshuffled the line-up with drummer Rod de’Ath replacing Campbell and Lou Martin joining on keyboards.

By the time of their first Montreux appearance in July 1975, this line-up had two studio albums – Blueprint and Tattoo – as well as the impressive Irish Tour ‘74, under their belt and were
a formidable live attraction. Gallagher and McAvoy fed off each other throughout their guitar-bass duets, and were egged on by powerhouse drummer de’Ath and Martin’s boogie piano and Hammond organ stabs. The quarted whipped up audiences
into a frenzy and seemed poised to make the leap into the major league. Earlier that year, Gallagher had jammed with the Rolling Stones for a couple of days in Rotterdam before leaving for a tour of Japan, therefore eschewing the opportunity to replace Mick Taylor. Instead, he signed to the Chrysalis label, a logical choice in light of their success with guitar heroes such as the Ten Years

After lynchpin Alvin Lee and ex-Procol Harum member Robin Trower. Against The Grain, featuring Gallagher’s by now iconic Strat on the cover, became his best-selling US album to date after a lengthy run of dates there at the end of 1975. Issued the following year and co-produced by Deep Purple bassist Roger Glover, Calling Card proved Gallagher’s most varied and enjoyable studio recording, and contained several of the highlights – Secret Agent, Do You Read Me, the title track – from his Montreux set in July 1977. However, after a couple of false starts in San Francisco and at George Martin’s AIR Studios in London, the guitarist ditched de’Ath and Martin and hired Ted McKenna, the former drummer from the Sensational Alex Harvey Band, to record the Photo-Finish album. The next year, the rejuvenated power trio triumphed at Montreux with a repertoire including the defiant Shin Kicker and The Last Of The Independents as well as The Mississippi Sheiks from that album.

Gallagher made three more albums for Chrysalis, the studio sets Top Priority and Jinx, as well as the inevitable concert offering Stage Struck, and ‘cheated’ on Montreux with an appearance at Paleo, the open-air festival located at Nyon, the Swiss town located between Geneva and Lausanne, in July 1983. Within a couple of years, however, he returned to Montreux, for a fine set still featuring McAvoy, along with drummer Brendan O’Neill, and Mark Feltham, the harmonica player from R&B revivalists Nine Below Zero, who made a sterling contribution to the Big Bill Broonzy acoustic blues standard Banker’s Blues.

Feltham guested on the albums Defender (1987) and Fresh Evidence (1990) and again provided several of the most memorable moments from the July 1994 concert featuring drummer Richard Newman, bassist David Levy and keyboardist John Cooke. Gallagher even welcomed the banjo virtuoso Bela Fleck and Nobs on harmonica – don’t pretend I didn’t warn you! – for a run through the Muddy Waters standard I’m Ready. It’s nice to be able to watch the complete 1994 set even if the footage brings home how much the years of alcohol and prescription medication abuse had taken their toll on Gallagher. Thankfully, the bonus acoustic tracks from 1975, 1977 and 1985 restore the blue collar musician to his glory years when few white bluesmen could touch him. “I try to adapt and interpret the songs at the same time,” he said of his Son House, Robert Johnson and Lead Belly covers. “I’m a cross between a dyed-in-the-wool purist and someone who likes to be free enough to play things on the fringes of blues. A night never goes past without me picking up a bottleneck.”

Gallagher collapsed on stage in Rotterdam in January 1995. Three months later, he underwent a liver transplant at King’s College Hospital in London but succumbed to an infection on the 14th of June 1995.

Since then, another generation of listeners have discovered him via the many guitarists he has influenced over the years, including Queen axeman Brian May, The Edge from U2, Johnny Marr of The Smiths, ex-member of Guns N’ Roses Slash and Joe Bonamassa.

In 2002, Gallagher appeared on an Irish postage stamp while a life-size bronze statue
of the guitarist was unveiled in Ballyshannon in July 2010. Montreux may well want to honour him too but, in the meantime, this definitive Montreux collection is a fine tribute to the legendary Irishman.