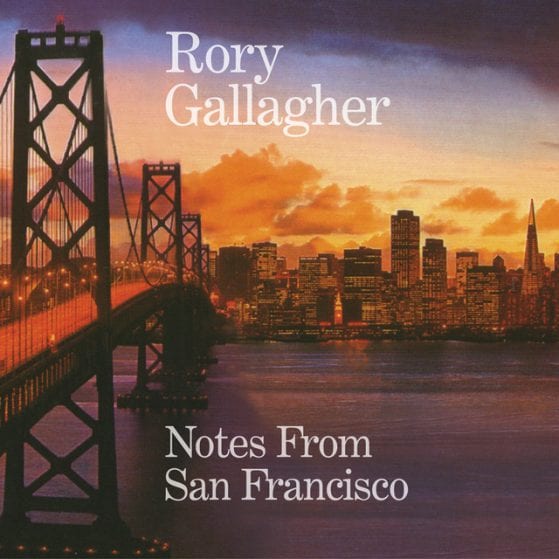 Following on from his successful second album for Chrysalis Records, ‘Calling Card’, Rory was encouraged by the record company to consider making an American album. It would involve recording with a US producer in a States-side studio, in an effort to strengthen his U.S. position and align his strong record sales with his impressive ‘live’ concert ticket sales.

Telling Rory of an American recording Chrysalis Records were doing with musician  Frankie Miller, at Elliot Mazor’s ‘His Master’s Wheels Studios, in San Francisco,’ prompted my brother to recall his past connection with Elliot, when Mazor travelled to Europe with signer songwriter Jake Holmes, who was appearing on Taste’s fair-well European tour, in 1970. While on tour, Rory had chatted at length with Mazor about musicians and recording in the U.S.A. Rory was keen on the Nashville recordings Elliot had made with ‘Area Code 615‘ and later his work on Neil Young’s ‘Harvest’.

So, in November 1977 as Rory was coming to the end of a 6 month world tour and while in Osaka, Japan he used the bands one day off to take them into a recording studio to demo the tracks my brother had penned and the results were couriered over to Elliot.

The Rory entourage, then flew from Tokyo to Los Angeles. Arriving on the 6th November, with a blanked out date sheet, all was set for the ‘American’ recording.

With little time to catch his breath, Chrysalis art director Peter Wagg had whipped my brother off for the album cover shoot with photographer Gary Heery, in L.A. By the 10th November, with the band’s back-line now safely freighted to San Francisco from Japan, we took the ‘shuttle’ up to the Bay Area and rehearsals commenced.

Our temporary homes were an apartment block, in the Pacific Heights district, La Guana and Broadway. Sharing an apartment with Rory, within which Elliot had installed a studio playback facility.

Located at 60 Brady Street, His Masters Wheels Studios became our home for the next month and half. Our next door neighbour was Stars Guitars, the owner Ron provided instruments for the Grateful Dead and the Bay musicians, Rory was in and out all day trying different guitars and all the omens for the recording looked good.

The studios were booked up until Christmas with mixing due to start early January but by mid Dec this plan was already going South and costs were ratcheting up .

The band returned home for a break over Christmas, and this is when I began to hear of Rory’s doubts and fears about his ‘American’ album, as he listened to track after track, “Maybe it’ll be okay when we mix it, but, but … ?” Uncertainty reigned, as Rory seemed lost for explanation. Was it the room? the engineering? Even the control room’s machinery seemed plagued with ‘gremlins’.

Reality and a certain amount of hind-sight suggest that in Rory’s ‘heart of hearts’, his disappointment with the project is that he wasn’t making the ‘American album he had envisaged. Despite their undoubted talents, he began to feel ‘saddled’ with his band, the financial burden of a recording project that had already exceeded it’s record company advance ($150k), and still had to be mixed and mastered.

With more time on their hands, the band musicians were ‘chilling out’ with the studio chief, this left my brother believing his control on the work had been diminished.

However Rory returned to San Francisco, reinvigorated by his stay at home in Cork, determined to see if he could salvage the recordings by re-mixing the tracks.

I arrived in Los Angeles on the 10th of January, in time for Chrysalis Record’s pre-arranged gathering of it’s 50+ sales representatives at their Hollywood headquarters for a playback session – this was to be the big push!

Rory was still ‘troubled’ with the San Franciscan sessions and didn’t wish to play the mastered disc to anyone other than myself. I tried to rationalise with him to allow me to take the album over to the Chrysalis meeting to play it to the executives with the condition that I tell them that he needed more time to do another mix on the tracks. This would ‘buy’ repair time and hopefully keep the kettle boiling with a little steam lost. With the pressure of time I frustratingly asked Rory at at least allow me to play a couple of tracks at the meeting. “No!” he replied. Again, I continued to plead, “If I don’t have something to play, at least can I take the record in and explain with it physically in my hand”. “No”, was the response.

As both our tensions and voices rose, Rory made his point and stance clear “This is what I think of the sessions”, as he released his fingers’ grip on the disc, allowing it to descend into the trash bin. “I’m going to re-record the whole album and with different people”, Rory concluded.

In horror and shock, I exclaimed “I feel like breaking ….” and left his room to head for Chrysalis’s office to try to blag my way out of the mess – I now had stage fright office style!

However, I knew our big ballon had just been pricked and all my hot-air may not re-inflate the company’s enthusiasm thereafter. So, confidence and trust were key.

We were given a couple of months extension to the delivery of the project, the Chrysalis team had showed me a little corporate mercy, though on the basis that they would get their recording and I was reminded that they had an option in our agreement after delivery.

Returning to the Sunset Marquis Hotel, I was greeted by the manager she curiously told me all was okay as I read my messages, the first from our travel agent Diane, “Have taken Rory to the Mount Sinai hospital, will call”. The hotel staff seemed confused as to what had happened to my brother, other than that there had been an accident.

I waited in dread until my good friend Diane returned with Rory some hours later. “Your brother is fine, he’s only fractured his right thumb and will be unable to play guitar for six weeks or so”, she advised.

Both relief and horror hit. “Better get us on a flight back to London, tomorrow I need to fly up to San Francisco and settle things with Elliot”, I requested of Diane. I knew we were in a deep hole and had to stop the digging.

Meeting Elliot at the airport, I settled all our affairs with the him, who had hoped that Rory might reconsider another attempt at the album, however, I had to tell Mazor that my brother’s position was entrenched, we parted amicably and I returned to L.A.

Diane being not only the travel agent for the Rory outfit but also the record company, meant the news of my brother’s accident reached the Chrysalis office quickly. This was fortunate as I didn’t have to deliver more bad news and the company allowed for a longer delivery time extension.

After a short stay in London, Rory and I returned home to Cork. Home was the best for healing, there we would chat until the dawn (my poor mother included), Rory a nocturnal being would only download after the midnight hour, the night’s calm seemed like a balm.

As band-leader, Rory would deal with musicians directly himself, with no others allowed. Way down the house’s long garden Rory told me of new demands Rod, Lou  (and Gerry to a certain extent) had made on him on our brief trip through London. I was quite taken aback, given all the circumstances and the escalated costs and borrowings for the album.

“What’s your response”, I enquired.

“It’s the end of this line-up as I see it, frankly, after the San Francisco stay, it’s time to move on. I want to find new musicians and return to a three piece, it’s all gotten too complicated and my music needs to be more direct”.

In the intervening days I suggested that he might consider retaining McAvoy, who had been disturbed by Rod’s tenacity and asked me to help him keep his position with Rory.

Encamped at London’s Air studios Rory began his auditions, and began to grow

dissatisfied and frustrated with the intake. Engineer Colin Fairley said “Is this the style you’re after?’, as he lashed into the studio kit.“You’ve got the job Colin!”, Rory seriously declared.

“I can’t help you Rory but I know the guy you need”, said Colin, “Ted McKenna, he used to play with The Sensational Alex Harvey Band”.

And so the next chapter unravelled and Rory, Gerry and Ted went on to record what became ‘Photo Finish’, which was released in October 1978.

Rory, however, was never against the San Francisco album being released in some form remixed. So now, in 2011, with all the benefits the modern studio affords, the album finally sees the light of day. It is coupled with a brand new live album recorded at a series of concerts at The Old Waldorf in San Francisco, that Rory played in December, 1979 which ably shows the power and sound of the trio that Rory was anxious to get back to.