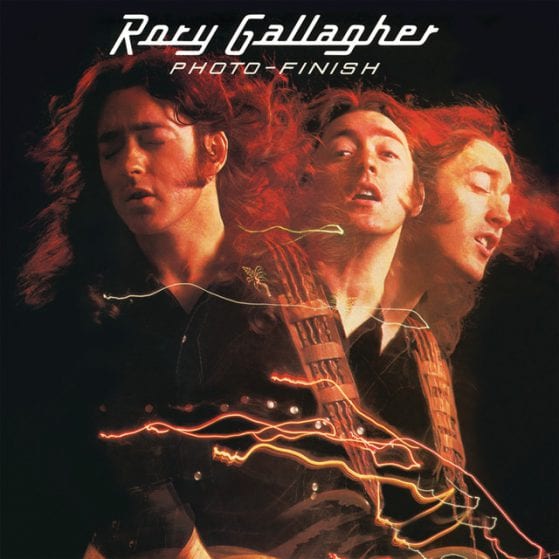 ‘Photo-Finish’ was so titled because the album was originally delivered to Chrysalis at the eleventh hour, just (and only just) making the deadline. Rory began recording the material for the album in San Francisco but on completion of those sessions he was unhappy with the results and decided to move the project to Germany. Meanwhile, Rory had written more songs and returned the band line-up to a three piece, Ted McKenna on drums with Gerry McAvoy on bass.

Dieter Dierks studio in Germany provided the perfect recording environment for Rory and he enjoyed the camaraderie of the other musicians who were also working at the complex, notably the Scorpions.

Shin Kicker – Is a hard driving biker anthem, giving an insight into the pace Rory exerted himself to on tour. The track should carry a ‘do not play whilst driving’ warning sticker – turn this track up and give yourself a speeding ticket.

Brute Force & Ignorance – Eloquently describes a trio of musicians creating ‘rock music’ havoc in a small town, a pastime Rory & Co were more than familiar with. Additional inspiration was also drawn from Rory’s visit to the Sex Pistols gig whilst he was recording in San Francisco. To contrast the environment of the lyrical plot Rory uses a subtle Tex-Mex country tempo across an open-tuned arpeggio.

Cruise On Out – Rory wrote this track with Elvis Presley in mind. The sensational rock ‘n’ roll lyrics about the ‘cat-man and his feline band’, with the pianist playing ‘eighty seven and one half keys’, tells an unforgettable tale. The production recreates Elvis’ Sun Recording sound, with heavy acoustic rhythm guitar, Gerry’s punching bass and Ted’s rock-a-billy drums forming the perfect musical backing for Rory’s blistering lead guitar.

Cloak And Dagger – A swampy, laid-back track scribed about the type of tough, bewitching ‘broad’ who was common place in the detective B-movies Rory loved so much. Listen for his harmonica playing and McKenna’s atmospheric drum feel.

Overnight Bag – The melodic lyrics of this track describe the lonelier side of life on the road, where Rory spent so much of his time. On this cut Rory creates a beautifully soft acoustic sound, particularly in the middle-eight.

Shadow Play – Starting with a pile-driving classic Gallagher guitar riff, this self doubting song gives us an insight into Rory’s double life, on and off stage, poetically described in the line – ‘A little bit of Jekyll, a little Mr. Hyde’.

The Mississippi Sheiks – Rory takes us back in time on a historical musical journey to the southern states and tells us of the blues musicians of the 20s and 30s. The Mississippi Sheiks were a guitar – fiddle combo comprising of Walter Vinson and Lonnie Chatmon who were joined on occasion by Lonnie’s other brothers Sam and Armenter alias Bo Cater, a blind street singer. ‘Peg Leg’ Howell, another street busker of the time, is also name checked in this excellent song.

Last Of The Independents – As a film buff Rory was inspired to write this crime song from just reading a newspaper review of ‘Charley Varrick’, featuring Walter Matthau and Joe Don Baker. It later became one of his favorite movies. Rory always stood his ground, remaining one of the last of the independents of his musical generation.

Fuel To The Fire – Through his songs Rory was an open book and again his sadness is shown in this soulful blues ballad with its beautiful harmonizing guitars. This track has echoes of his earlier classic ‘A Million Miles Away’.

Early Warning – Rory always recorded more than could be cut on to a vinyl album. This thunderous, heavy rocker was taken from the sessions and has now been added as a bonus track. It was penned as a chilling anti-nuclear warning, with the cold war and Greenham Common dominating the headlines of the time.

Jukebox Annie – A Southern feel, honky-tonk based tune dedicated to the barmaid of the title. This number makes great use of Rory’s dobro slide and harmonica playing.