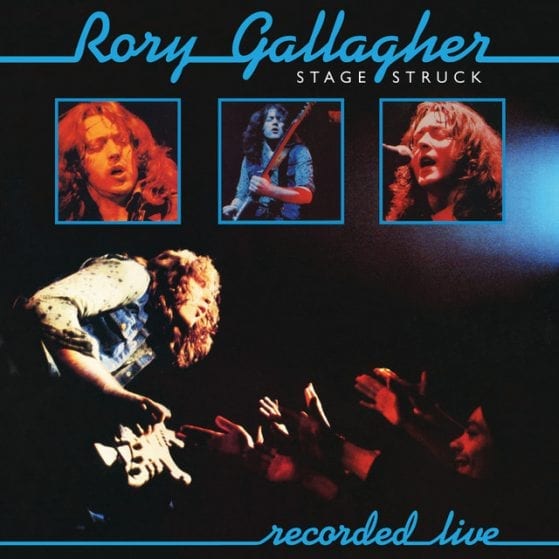 Touring as a three-piece again, 1980 arrived to find Rory circumnavigating the globe like a sputnik, with his band,Ted McKenna (drums) and Gerry McAvoy remaining on bass. After two years of constant playing together, this line-up was as tight as a straight-jacket. To capture the essence and presence of Gallagher in full action was a difficult task but due to the success of his previous live recordings several years earlier (‘Live in Europe & ‘IrishTour’) Rory had created demand from all quarters for more of the same.

Consequently, the job to record performances whilst on a world tour became a task of mega proportions: the shipping of various multitracks from one destination to another, studios to suit gaps in Rory’s schedule so that ongoing mixing and assessments of the recordings could be made.

SHIN KICKER, this anthem for bikers, literally kicks off this live assault.The track is a descriptive snapshot of how frenetic life had become for Rory.

In full flow with adrenaline pumping at a rate of knots, Rory electrically finger picks his way into WAYWARD CHILD. The less said on the lyrics the better – big brother is watching me!

Slipping the pace down a gear the band break into BRUTE FORCE AND IGNORANCE, which lyrically draws an analogy of a rock trio blazing its way around the World with the unpredictability of a hurricane.

The distinctive guitar intro always alerted an audience to MOONCHILD. The structure of the track allowing Rory a license to thrill – guitar wizardry at its best.

HELLCAT, a signature rock steady riff intro, withTed McKenna and Gerry McAvoy laying down a solid rhythm foundation for Rory to go on some great slide guitar runs.The eerie Rory lyric, is perhaps his self recognition of being haunted by his own demons.The intensity of the beat, sharp slide, mixed with tough vocal delivery were Rory’s means of fighting back and trying to exorcize this menace.

BAD PENNY with it’s swaggering tempo, is a perfect showcase for the three piece and performed live, gave the band room to stretch itself musically.

KEYCHAIN a tough modern blues, features the Man in fine vocal scatting mood over his slide guitar. On this particular performance, I recall Rory stretching and bending his guitar strings to the limit of their tolerance, causing the tuning of the instrument to alter dramatically.

The opening rhythmic riff of FOLLOW ME resets the high energy buttons on this song which emphasizes Rory’s awareness of the shortness of time.

Time to boogie. BOUGHT AND SOLD with its lovely unison between guitar and voice, ends with melodic touches of its sister song ‘Lost at Sea’ from the album ‘Against the Grain’.

Crime lyrics to the fore on THE LAST OF THE INDEPENDENTS. A high speed juggernaut of a track rolling out a great drum break from Ted, with Rory again demonstrating his mastery of the slide guitar.

SHADOW PLAY, one of the perfect rock-riff classic songs in Rory’s arsenal with which he would end a show. Rory would always leave the stage having given 100% plus. The lyrics highlight the ‘Jekyll and Hyde’ performer transforming back to his normal persona and quietly waiting until his return to tread the boards again.This man was undeniably Stage Struck.